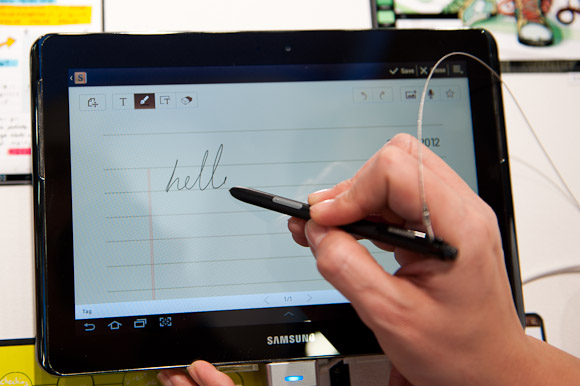 The Galaxy Note 10.1 was first introduces at the Mobile World Congress in February, but Samsung thought that the tablet needed more power and this week the company announced an updated edition with a 1.4 GHz quad-core processor with 2 GB RAM.

What differentiate the Galaxy Note 10.1 from the rest of the 10 inch Android tablets are the included S Pen stylus, the split screen feature and the included apps designed for stylus usage.

The pre-installed Adobe Photoshop Touch is also available for normal tablets, but the S Pen give the user a more precise control than a finger can provide. The split-screen feature enables the user to truly multitask by having two apps running side-by-side. This is ideal when for example reading documents or web page in one window while taking notes in the other window. Text and selected areas from one window can be dragged and dropped into the other window.

The companioned S Pen can be stored in a slot on the side of the tablet.