The innovative 2-way slide concept makes it easy to switch between different modes, going from reading maps to watching a video with a simple slide. A numeric keypad slides out from one end of the device while dedicated media keys slide out from the opposite direction,
converting the display into full screen landscape mode.With powerful3D graphics, the Nokia N95 has a stunning user interface that makes it intuitive to find the features and services you want.

With its integrated GPS at your fingertips, finding your way just got easier.The Maps application includes maps for more than 100 countries, enabling users to explore the world, find specific routes or locate services such as restaurants and hotels and covering more than 15
million points of interest. You can also purchase additional features,such as city guides and voice guided navigation.

With the Carl Zeiss optics on the 5 megapixel camera, you can capture print quality photos and DVD-like quality video clips. Photos and video clips can be enjoyed on a compatible television thanks to the device's TV out feature and support for Universal Plug and Play (UPnP)
technology.

Designed for High Speed Downlink Packet Access (HSDPA) networks and with support for WLAN, EDGE and WCDMA networks, the Nokia N95 provides excellent coverage and speeds wherever you may be. In HSDPA networks, browsing the internet, reading email, streaming video and downloading large files can be carried out up to 10 times faster than with 3G.

The Nokia N95 also offers a first class entertainment experience with the combination of a large 2.6" QVGA 16 million color display,impressive 3D graphics, built-in stereo speakers offering a 3D stereo effect, standard 3.5 mm audio jack, support for compatible microSD cards and mini USB for convenient data transfer. Browsing the internet on the Nokia N95 is a pleasure using the Nokia Web Browser with Mini Map, with new features such as a floating toolbar, password manager and auto complete, as well as web feeds with support for Atom and auto update.

The Nokia N95 is based on the world's leading S60 software on Symbian OS, enabling you to personalize your device from a wide choice of compatible applications that can be downloaded to the Nokia N95,including games, navigation, entertainment, productivity and creativity.
The Nokia N95 comes out of the box ready to create, connect, consume and interact with some of the internet's most popular services. Use Yahoo! Search to search for and find most anything on the web, scroll though a book with Amazon's MobiPocket Reader or snap a photo and send it directly to your Flickr site.

The Nokia N95 is expected to start shipping in volumes during the first quarter of 2007 at an estimated unsubsidized retail price of 550 euros. www.nokia.com 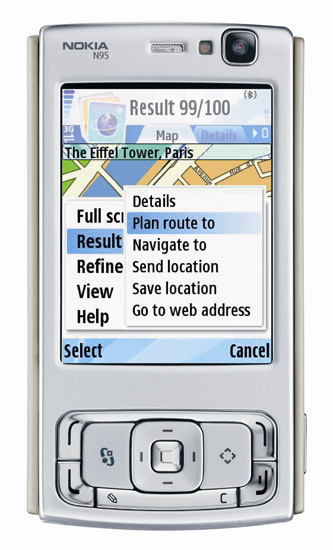 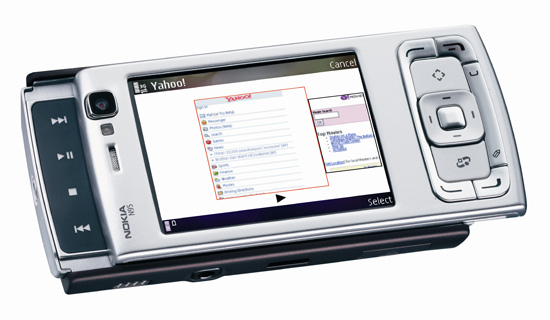 Orange Launches Unique Phone: One Phone for Mobile and Home

Comments
On 16 Oct 22:57 rasa wrote
hey can any one tell me how can i buy this phone online...? and how much does it cost
On 29 Sep 23:09 sefan wrote
nice 1...
On 29 Sep 11:58 athul wrote
it's cool and the camera is best.
On 28 Sep 12:22 Cris wrote
This phone is too damn close to be the ultimate smartphone... If the front camera is VGA and the battery is as powerful as in the N73 and N93 or more powerful? Have the screen of N90 or N80 perhaps? and have a touch screen and a stylus? BUT STILL... Nokia N95 is the GREAT PHONE to date!
On 27 Sep 18:36 etaab wrote
Its far too early to judge how efficient the battery will be. Dont talk silly.
On 27 Sep 17:58 sensibleone wrote
Those who buy phones for looks will be pleased. I don't care what they look like. They sit in my pocket, and I don't require an ego boost from a phone. Having said that, if this phone walks the talk, then it may be on my list instead of my long-awaited P990. However, this is unlikely, since I understand this Nokia has significant battery problems. Still, those who buy phones for their looks, will be quite happy to show it off while it's switched off.
On 27 Sep 15:44 nelly6602 wrote
Looking good the same form as N80 and again just the colors are changet and ofcours it's big like every Nokia phone * they will never learn to make a normal phones *
On 27 Sep 14:55 Anzell wrote
well at this time nokia make step a head than nokia's rival. this serie is good cellphone. i like SE but this time nokia win. about the feature and model. but i doubt about the price. and i think this cellphone is break the limit this time. and onething guys our comment must be neutral. good job nokia.
On 27 Sep 11:40 anand wrote
ok this cell is definately a killer one but am sure se will come out better than this and i feel so confident after using p990i
On 27 Sep 06:51 SloopJohnB wrote
It may not have touch screen but it sure is better than P990i. Touch screen is great but it requires two hands and that can be be quite annoying sometimes.
On 27 Sep 06:15 Chamak wrote
The only thing it's missing is Touch-Screen :(
On 27 Sep 02:37 crude75 wrote
@whitelighter
dont be in denial, this is a better phone than the se p990.
On 27 Sep 01:25 whitelighter wrote
all i can say is.... another nice one by Nokia.... but its way way behind compare to SE P990i, so please dont compare
On 27 Sep 01:16 Dale wrote
Not bad......nice
On 27 Sep 00:33 TetsugakuSan wrote
I spent £500 on an N93 and had to sell it after 3 weeks as the video, images, and software were *SO* bad. This looks like a staggering phone - but it won't be any good before the first few software patches . . .
On 27 Sep 00:29 SloopJohnB wrote
I believe SE has change its police to brand phones because it can not compete with nokia and other companies that make all-in-one high tech phones. N95 is a clear evidence of that. It took forever for SE to put P990 in the market and it´s no match to N95. And the N line is much more varyed than just N95. It will take months or years fot SE to come up with a phone like N95.
On 26 Sep 23:58 grimm wrote
Nokia are killing SE at the moment,im a loyal SE fan but lets face it,ud think SE cud churn out quality fones like this a lot quicker surely.For me its either gonna b the N93/N95 or the Benq Siems SL91 if SE dont announce sumthing soon.
On 26 Sep 23:29 osmano wrote
But will it work.....
On 26 Sep 22:19 Marc wrote
Hi all,
To those that said no WiFi you need to learn to read, as for will it be buggy thats anyones guess but judgeing by the N93 i doubt it. The only problem i have with it is the inclusion of GPS and maps as my preffered GPS mapping is Tom Tom otherwise the specs for this phone is amazeing.

Marc
On 26 Sep 21:10 Lazyboy wrote
OMG! Its so beautiful!
On 26 Sep 20:16 Vodajon wrote
this handset is a test bed for nokia... they always release a handset that has everything for the tech savvy people to try out... they iron out all the bugs and filter out things that dont work for people....

then release a good allround phone which appeals to the mass market!

J.
On 26 Sep 20:07 miguelandre82 wrote
Well if SE continues with their politic of making phones with diferent brands like walkman and cybershot i dont think they will bring anything close to this but if they do it will be 2 devices... one with auto focus and one with a good music player and megabass to make us choose one! LooL. N95 is a true all in one device with very good specs in all aspects and SE with their current stupid politic will not have anything close to this. :s
On 26 Sep 20:05 BIGALBERT wrote
The phone looks great & is packed full of features, but remember this! Everytime Nokia bring out a new phone that is crammed full of features,that 50% of noika user's don't use (they only got the phone cos it;'s new & its by Nokia) there is always a software problem of some description. As far as i'm concerned i'll always be

Come on SE,give your ultimate new product and don't be too late.
On 26 Sep 19:25 tindo196 wrote
well if they bring out the phone as they have listed and if the software is not tha buggy and if the battery life is ok then i really think it will take a lot to beat this phone
On 26 Sep 19:22 awave wrote
THIS is the first TRUE all-in-one / one-for-all!!! - i want one...but they're gonna be big and bulky like the current n80 (had a look at a friends one....lucky sod....except the pics come out shit imho! w810 is much better lol!)

and yeh....sony ericsson are a while off this - but think of the bugs in this - i have problems having bluetooth and wi-fi on my computer - bluetooth, wi-fi + gps - now thats a recipe for disaster unless it doesn't actually have wi-fi :S - how could it suceed the n80 otherwise????