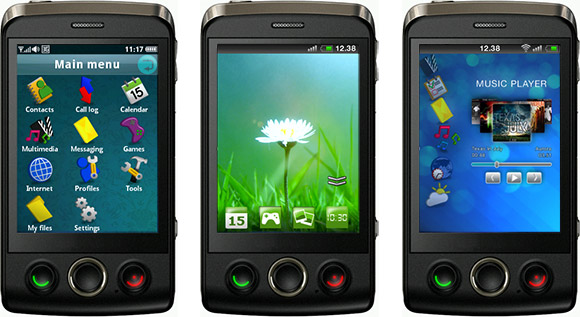 Last year, the first rumour of a new smartphone OS developed by Nokia begun to spread. A new OS based on the Linux platform with the code-named "Meltemi" was supposedly being developed by Nokia. The OS was developed for low-end smartphones and it would take over after Symbian S40. Nokia could have skipped the in-house development in favour of Smarterphone. Or, Smarterphone 3.0 OS could have been Meltemi all the time.

Smarterphone is a Norwegian software company with 22 employees which develops the Smartephone applications suite for mobile handsets. The Smarterphone OS delivers advanced functionality on low-cost hardware. It is also easy to customize the software for various markets, operators and handsets. Smarterphone 3.0 goal is not to compete with Windows Phone, Android or Blackberry. But it is light OS which do not require the dual-core 1GHz processors we often hear about these days. Still, the OS seems to have a elegant looking user interface.

Ferd Capital, a Norwegian financial group sold its share for an unknown amount. The company invested 50 million NOK (6.5 million Euro) in Smarterphone back in 2007. Ferd owned 80% of the shares in Smarterphone. The transaction happened in November 2011 and various sources estimated a transaction value of more than 100 million NOK (13 million Euro).

The Smarterphone company was previously named Kvaleberg, and the founder Egil Kvaleberg has also sold his share in the company. Mr Kvaleberg is now Director of Smarterphone Framework at Nokia.

Haavard Nord, one of Smarterphone's Board of Directors was also the co-founder of Trolltech founded in 1994. Trolltech was the company behind QT. Nokia bought Trolltech for 153 million Euro back in January 2008.