Last year at the Mobile World Congress, we saw that many manufactures used the term "With Touch Display" as THE marketing word. This year, all manufactures have at least one model with touch display as the main input method so they needed something else to differentiate themselves from the rest. Application Store, Megapixel, Windows Mobile 6.5, Android and Symbian has been the promo word of MWC2009. Except from Palm and LG that is. LG, with its Arena is having ease of navigation as it main feature. From what I have seen, I must say they have succeeded with this. The Arena is using a brand new interface where your finger and its gestures are in focus. LG call this new interface for S-Class UI which they tell us are specially designed to enhance the phones multimedia features. I wonder if the term S-Class is loaned from Mercedes luxury car models? 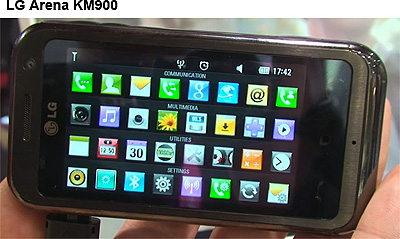 On the Arena, the desktop screen looks very much like the Apple iPhone. You can not deny that. But LG has done something Apple haven't. They have made the menu icons personalized. When holding the LG in portrait mode, you have four row of icons and they are grouped into Communication, Multimedia, Utilities and Settings rows. They can be scrolled sideways and the order of appearance can be changed. In portrait mode 4 x 4 icons are visible. If you turn the Arena 90 degrees into landscape mode, the size of the icons are reduced, and the will have access to them all. Still four rows, but now with 8 icons per row. I asked about the maximum number application short-cuts, and was told that these 32 was maximum. It is possible to install Java applications on the LG Arena, but I did not have the opportunity to find out where such 3rd part applications will be found. At the bottom of the screen when holding it in portrait mode, you will find four icons which are fixed and will always be visible. These are the applications Phone, Contacts, Messaging and Cube (main menu). Below this again, outside of the display, we will find another three essential buttons. Call, Cube and Cancel.

The LG Arena LG-KM900 which is the full name of the device, has a virtual keyboard which is of number type when Arena is held in portrait mode, and it will automatically switch to QWERTY mode in Landscape mode.

The navigation is in my opinion the most spectacular with this device, but it also have a new feature I haven't heard from a phone yet: Dolby Mobile sound. You will need to connect earplugs or use the TV-out connection to experience this enhanced sound capability as the one built-in speaker is mono only.

Arena will be available in stores in Europe in the beginning of April this year. It will be interesting to find out more about this phone. We do not know anything about the day-to-day usage and important things like battery capacity for example.

Comments
On 17 Mar 11:52 iphonelover wrote
i agree with @carkitter the iphone has an app store. lg can't beat that. b-sidez if they did copy the iphone the world would just say:"lg get a life"
i would.

so all in all iphone can change into an ipod touch whenever u want it 2. lg arena cant do that can it?
in ur face lg.
On 9 Mar 13:30 macbook wrote
so funny reading comments from iphone owners. its human nature to defend what you've bought, but get over it, iphone is good design but beauty is only skin deep. LG have taken the design but if you read the specs actually have produced a much higher specd device.

iphone is old now and needs to have a price reduction if its going to attract users. imo..
On 6 Mar 16:02 Superkikim wrote
Very nice vid. I love it...

Well It doesn't look bad, does it?

That the iPhone is the breakthrough internet device Apple market it as is proven by the figures. That those figures represent only three models (iPhone 2G/3G and iPod Touch) versus all the Nokia smartphone models shows how much of an uphill struggle LG and others have ahead of them. Rumour has it that the next iPhone spec will be virtually the same but the price and plan prices will drop further. Bad news for competitors profit margins I'd say.
On 26 Feb 00:29 laffen wrote
@carkitter
So what you meant with "disappear in a sea of iPhone copies, none of which will actually threaten the iPhones dominance" was that no other device will be more popular than iPhone when it comes to counting number of pageviews?
On 24 Feb 22:41 carkitter wrote
Thats because your looking at the wrong figures.
http://arstechnica.com/apple/news/2009/02/report-gives-iphone-51-of-us-smartphone-ad-market.ars

Figures for internet requests by Mobile phones show 51% for Apple in the US (1st place) and 34% worldwide (2nd place). Nokia is in the 'other' category in the US (<6%) while 43% world wide. LG figures are 'other' in both categories with <6% and <4% repectively. Thats the dominance I'm talking about and that LG is responding to. I just don't think that copying the iPhone exactly in some areas, badly in others is enough to compete. And as for the Linux style cube menu, its cute but won't tempt iPhone users away from the App Store.

Which developers have announced they'll be developing for LG? I'll stay where the best Apps are at least until SF gets is act together for the Idou.
On 23 Feb 10:29 SloopJohnB wrote
It tries too much to look like an iphone... it´s kinda sad.
On 22 Feb 23:15 norbinw wrote
Why the hell does everyone say that it's an iPhone??? (and not just this.. Idou too)??? because it is similar in looks? How the heck do you imagine a touchscreen phone??? Can you design it otherways? Other menu? All phones that are TS, and have only a big screen have to be similar, have to use the same touch commands.. Don't know if you get it..
On 22 Feb 12:53 laffen wrote
@carkitter
LG sold 100 million mobile phones during 2008 while 13,5 million iPhones were sold during the same period.
For the record:
- Nokia 470 million units sold in 2008
- Samsung 200 million
- Motorola 99.9 million
- Sony Ericsson - 96.6 million
iPhone has less than 1.5% of the total market. I can't see where iPhones dominates among these figures?
On 22 Feb 11:05 Karlsson wrote
Lg and iphone .Have in my opinion the same issue.I feel cage in,I´m not
free to do what I want with it.Someone else just want my money and I should just shutup.With Uiq and symbian I´m on the free plains.(they want my money as well)but they dont slap my fingers.
On 22 Feb 09:03 carkitter wrote
Sorry Laffen, but I paid more for my V800, K700i and my wifes Z600 than I paid for my iPhone and the 8GB I have is only half full. Also, in NZ iPhones are SIM unlocked so any operator is okay.

This LG strikes me as a good phone but one which will ultimately disappear in a sea of iPhone copies, none of which will actually threaten the iPhones dominance. The Idou on the other hand... I can't wait!
On 21 Feb 15:53 wrote
...
6. Bluetooth
7. Take video
8. Better camera
On 20 Feb 10:17 laffen wrote
I can think of several reasons why you want this over an iPhone
1. It is not Apple
2. It has a better navigation system than iPhone
3. It is less expensive
4. The 8GB built in memory can be expanded with 32GB to a total of 40GB
5. You can choose any operator
On 20 Feb 04:49 yeag wrote
Why anyone would buy this insted of an iphone is beyond me....
On 20 Feb 03:50 SeF wrote
For the first time i've never been this disgusted with such a company, LG is almost the most desperate copy-cater i've seen.
On 20 Feb 00:35 laffen wrote
How it is possible to "hate" a phone without even tried it is beyond me.
On 19 Feb 20:58 mediar wrote
I hate this phone - it's just a iphone copy. I can't see nothing revolutionary in it's UI design - just a fake IPhone. Bad step from LG.
On 19 Feb 16:19 lgcookie wrote
@ carkitter it does have an os so it does need an app store
you can just use java apps or games
On 19 Feb 16:02 robertson wrote
@carkitter

go to bed
On 19 Feb 12:18 carkitter wrote
Some people accuse the iPhone of being all looks and fluff but no depth, well this is just such a phone. It reeks iPhone from the chrome bezel to the icons and 'jumping' keyboard letters but without the quality of design that makes the iPhone UI such an intelligent solution and without the App Store which obliterates every other OS platform ATM.
Good attempt, but must try harder LG - sorry.