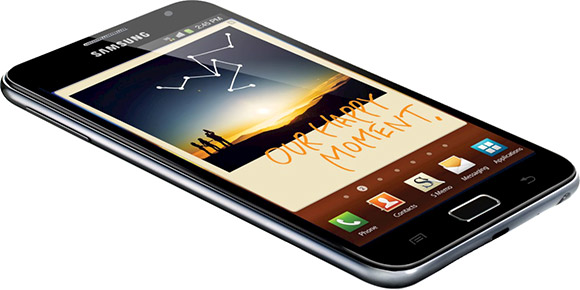 Earlier this month, Samsung told us to expect something big. It sure was big. Today Samsung announced the smartphone with the largest available screen size. The Samsung Galaxy Note has a huge 5.3 inch touch display in addition to a powerful 1.4 GHz dual core processor.

The Galaxy Note display is of course the eye catcher here, but a 1.4 GHz dual core processor is one of the fastest mobile processor available today. The Galaxy Note is a very light phone. The weight is only 102.4 gram. That is impressive. It is lighter than the current flagship model Galaxy S II which weight 116 gram. Samsung Galaxy Note are shipped with a stylus called the S Pen and S Memo which is a multimedia application designed to record all forms of user-created content.

Update: Seems like the Samsung Mobile press release has some incorrect numbers. The size, weight, memory and battery data are likely to be wrong

Samsung Galaxy Note runs on Android 2.3 Gingerbread and a powerful 2500 mAh battery are promised to give 13 hours talk time and 580 hours standby time.

jplacson9 years, 9 months ago
That's what she said! Hahahaha!

julias9 years, 9 months ago
What a beast of a phone and i like it!

tranced9 years, 9 months ago
There really are some facts that have got me astonished! First, I think it's a tablet even if it says it's a smartphone. Second, it's only got 150mb while it could have more than that. Third, I imagine it is a little bit empty inside due to its weight.
So, there will be pants with bigger pockets from now on?

laffen9 years, 9 months ago
I guess it is a mix of smartphone and tablet. But a tablet would have Android 3.1 Honeycomb running. This one has Android 2.3 Gingerbread optimized for smartphones.

masseur9 years, 9 months ago
agreed. but even so, I think it has to be considered as a tablet as I don't have a shirt pocket big enough!

maybe this is one for the ladies handbag?

laffen9 years, 9 months ago
@masseur
I am sure you have a pocket large enough. The Galaxy Note is smaller than an iPhone 4. http://www.esato.com/phones/compare.php?phone=852&cp=622

masseur9 years, 9 months ago
I must admit I didn't look to closely at the size. I just immediately imagined it to be considerably larger.
Amazing how they got a 5.3" screen into almost the same package as the 3.5" iphone.
Now it has my interest

Tsepz_GP9 years, 9 months ago
There is absolutely NO WAY it can be smaller than an iPhone4 and still have bezel, some of those Esato specs are incorrect, they claim a 1200mAh batt, but GSMArena say 2500mAh: http://www.gsmarena.com/samsung_galaxy_note-4135.php there is no way a device with such a huge display can come with a tiny 1200mAh batt, and no way it can be shorter than an iP4 yet same width.

wiraperkasa9 years, 9 months ago
well @laffen, i dont know whether samsung made a mess, but what you post was totally different with what engadget have...for starter, it has 2500 mAh battery with 178g of weight..

masseur9 years, 9 months ago
Here's an official video and it certainly looks big in the hand compared to how my iphone 4 looks in my hand.

julias9 years, 9 months ago
slashgear have a hands on review and certainly is quite big with the side by side comparison with the galaxy SII..

Tsepz_GP9 years, 9 months ago
I thought as much, that thing is huge, there is simply no way it would be the size of an iPhone and still have bezel around the screen, the screen itself is almost as big as an entire iPhone.
Samsung will need to fix their details, must have been posted in a rush.

laffen9 years, 9 months ago
I've asked Samsung for a correction and I will update the specs as soon as I hear from them. The faulty specs seems to have come from the Galaxy Wave Y page
[ This Message was edited by: laffen on 2011-09-01 13:46 ]

julias9 years, 9 months ago
engadget has posted a hands on video..

NightBlade9 years, 9 months ago
Samsung have officially given birth to the phablet.

false_morel9 years, 9 months ago
Samsung introduced this as a "fourth" device along with the smartphone, tablet, and laptop..
It fits between the smartphone and the tablet of course..
While in reality it is a tablet optimised to be used as a smartphone!
Does it fit in the pocket? No.
Could it be handled by single hand? No.
So it's not a phone!

titus19 years, 9 months ago
Are we now men of giants? 5.3 from Samsung...4.7 from HTC
Why just can't they put all the goodness in a pocket friendly, palm friendly size...about 4' display.

masseur9 years, 9 months ago
I think they have already... in the Galaxy 2, but here they're clearly trying to make a market between that and the 7.7 tablet in order to cover all ground

razec9 years, 9 months ago
Probably a show-off device to amaze even the hardest core iphone users, a phone with 5.3" HD screen, wonder if they've already beaten retina with that pixel density. and the CPU is twice as fast as Arc S theoretically, sadly until we see Ice Cream Sandwich on this, the dual core is a gimmick.

Maybe, but not for the ladies hand

, these large, thin phones are very uncomfortable to hold, when you have small hands.


I wouldn't say I'm a hardcore iphone user, but for the last few years it has held my attention though android has been tempting and I have had the Desire, Galaxy and Galaxy II among others during that time.

But its interesting that 4 years after the iphone launch that there are still people hoping that a new device can outdo the current spec iphone (in the quoted case here) or previously of the unnanounced spec iphone 5 (as in the case of the Galaxy S II LTE)!

julias9 years, 9 months ago
Side by side with the iphone 4...

NightBlade9 years, 9 months ago
How awkward would it be to hold that against your ear?

masseur9 years, 9 months ago
when you put it like that... I guess so

as long as it comes with an all-in-one content management solution, that is all I really ask over and above the actual phone choice
More comments