Amazon will soon open an app store competing with Android Market. To create awareness of the store, Amazon has signed an agreement with Rovio to exclusively offer Angry Birds Rio edition 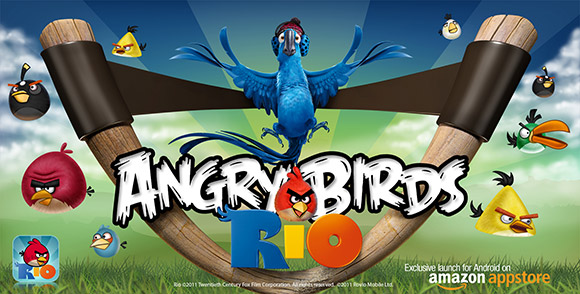 Android Market is the first place to look for new apps for owners of Android devices. Now, Amazon wants a piece of the lucrative app market. The first step is to open up an app store. Amazon says this will happen very soon. The second step is to have some goodies to attract new customers. Being the only Android app store to find Angry Birds Rio is most likely a guarantee for success.

Earning money is probably the main reason why Amazon wants to compete with Googles Android Market. Another reason could be that they want to make a Android powered hardware such as a new Kindle. Android is open source and anyone can modify the source code to fit a particular hardware. The troublesome thing for Amazon is that to be able to access the Android Market with a new Android device, it must be accepted by Google as "Android compatible". Google has a list of hardware features that must be fulfilled before the device can Android compatible and gain access to the Android Market. The list changes with the Android version. For example: Android 2.3 requires the screen size to be at least 2.5 inches large and applications must be allowed to change the orientation of the display. If Amazon wants to make a new Kindle without change of screen orientation then this device is not Android 2.3 compatible, and will not be allowed access to Android Market.

goldenface11 years, 2 months ago
Good news. I love those birds.

mortengutt11 years, 2 months ago
So Angry Birds Rio will not be avaiable for iPhone?