The Star / S5230  / Tocco Lite has sold more than 30 million units since launch in May 2009. It has obviously been a demand for a entry-level smartphone and Samsung are now updating its portfolio of entry-level phones with the Star II S5260. The originally Star was not full of features, but the price was low enough to generate these huge sale figures. Nothing is said about the retail price for the new Star II, but we expect it to be in the same range as the original when it first appeared.

Star II has a couple of pre-loaded social networking applications such as Facebook and Twitter. It also multi IM for Yahoo Messenger, Gtalk, AIM and Facebook chat. Some of the improved hardware features are: 3.2 megapixel camera, 3 inch WQVGA (240 x 400 pixels) display, Blueooth 3.0 and Wi-Fi connectivity. 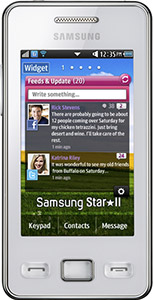 Samsung Star II will first be available in Germany followed by other European countries, South America, India and Middle East.

Lenovo will start making smartphones for the worldwide market