http://www.youtube.com/watch?[....]=player_embedded&v=uCwgKXX-lw4
Posted by Tsepz_GP
I love the design, look and size, i actually want it

Apple have hit a sweet spot with this one i must say. May just replace my Galaxy Tab10.1.

I'd pick-up the Black/Slate 64GB, looks stunning.
I want another OS in my devices, my phone HAS TO BE Android though, but my tablet? I'm open to iOS, Android, BB and Windows.
Posted by Indiandawg

Apple have hit a sweet spot with this one i must say. May just replace my Galaxy Tab10.1.

I'd pick-up the Black/Slate 64GB, looks stunning.
I want another OS in my devices, my phone HAS TO BE Android though, but my tablet? I'm open to iOS, Android, BB and Windows.

I totally agree with you. Android is best for the smartphone but initially I thought iOS is the best for tablet and I realized it's PATHETIC.

I want my tablet to be equivalent to computer and iOS is like way behind. The same iOS features on their iPhones is on iPad. I don't use my Macbook Pro anymore cause I hardly get time to use and so iPad does it all. But when I want to download torrents or something, that's where I get stuck. Or I want to download music again I get stuck. Everytime use iTunes for transferring music is ridicolious. I don't even transfer music anymore cause I'm tired of sync music through iTunes. Youtube app on iPad is worst. It takes so much time compared to regular time. You can compare by loading a video on mobile website of Youtube and Youtube app on iPad. Sharing has always been bad on iOS.

I love Apple for their notebooks and computers. I love MAC OSX. So don't take me as an apple hater. Just I've had a bad experience with iOS on iPad. Do use it before you buy or else you will regret it a lot. It can't do lot of daily stuff.

Besides, the good side of iOS? it's stable. Yes, it is. The multi-touch is like so flawless it's just amazing. The apps are so neat and clean on iOS and they look so rich. The games have never lagged and it's been bliss to play games on iPad.

All in all it's a great device but the software (iOS) really lacks the true features that one does need every time and then.

Posted by hihihans
Am I the only one who sees the humour of the screen size?
7.9 vs 9.7

Posted by badassmam
I think that all tablets apart from the Windows ones are useless for work. They are for multimedia purposes but not much more. iPad Mini is perfect for reading books, watching video and browsing like every other 'dumb' tablet. Even Android tablets are really basic in my eyes. People come to our meetings with iPads to show PPTs but the serious ones bring their laptops along and show off all sorts of data and documents.The Mini will outsell the normal iPad, nothing against tablets but the Windows Surface Pro is a serious machine for work. Apple have done well here and they'll eat up all the competition now, one step closer to World domination.
Posted by Bonovox
Have seen some early reviews of the Surface and they seem to love it
Posted by etaab
And i dont like this at all. The screen just looks so square and 4:3 even if it isnt. It reminds me of that horrible 4:3 ratio LG phone whatever its called.

Id prefer the latest and largest iPad if i were in the market to buy one.
Posted by Guarulhos
Teardown Apple IPad Mini !!!

Posted by julias
No iPad mini queue in London, you can walk in and buy one.


I read in todays Times newspaper there was a large article about how poor the turnout for the new mini was. Where in some cities they usually had hundreds sat outside for days before launch, there were only around 50 people. 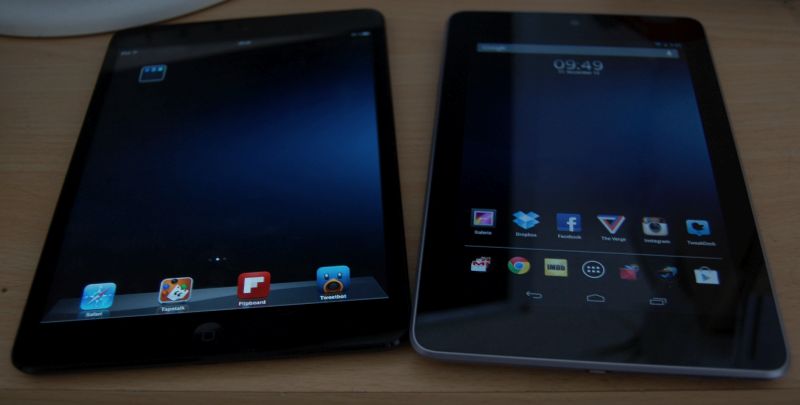