Germany's Fraunhofer Institute is working on building solar panels for mobile phones and other portable devices.

Mobile devices are becoming more and more intelligent allowing users to watch movies on a mobile phone or laptop, or navigate with a PDA  but at the same time they require increasing amounts of power. To prevent the PC screen from suddenly going black, or the music from being interrupted, Fraunhofer researchers are working on micro power engineering solutions to provide the mobile power needed by modern communications devices.

Under the leadership of the Fraunhofer Institute for Solar Energy Systems ISE, scientists from various institutes are working on technologies that will make it possible to achieve greater power densities and, when combined with batteries in hybrid energy systems, extend operating times. At the Hanover Trade Fair, the researchers will be displaying new energy storage technologies, micro-fuel cells, and information on the opportunities offered by "energy harvesting," or drawing power from multiple energy sources available in the environment of the device.

The Fraunhofer Institute for Integrated Circuits IIS in Erlangen has developed an inductive charging process for smart cards that involves using electromagnetic fields to charge the chip, similar to an electric toothbrush charging station. Design plays an important role in many devices; traditionally, devices such as laptops or camcorders have had to be designed around the power supply, in which case the rechargeable battery takes up considerable space. Researchers at the Fraunhofer Institute for Silicon Technology ISIT in Itzehoe have developed a flexible, bendable battery that gives designers more freedom in determining the shape of the device housing  this would allow laptops or PDAs, for example, to be made even smaller. Solar cell technology also lends itself to use in modern mobile devices, as demonstrated by the solar-powered mobile phone introduced by researchers at the ISE, which achieves a module efficiency rate of 20 percent using device-integrated, high-efficiency solar cells.This technology will enable unlimited standby times, meaning the phone can always stay powered on. A solar-powered PDA would also be capable of operating self-sufficiently.

Future efforts to optimize power supply systems for mobile devices will increasingly involve the use of multiple power generation technologies with an electric buffer store. In order to achieve maximum power utilization with the highest degree of efficiency, a system of intelligent power management is needed. The goal is to link the energy delivered by batteries, solar cells, thermoelectrics or fuel cells in a device. With this kind of system, a laptop could switch to fuel cells when the battery is depleted, and this in turn would be continuously recharged by the solar cells whenever light conditions were favorable. Power management ensures that MP3 players, mobile phones and notebooks always have an optimal power supply.  www.fraunhofer.de 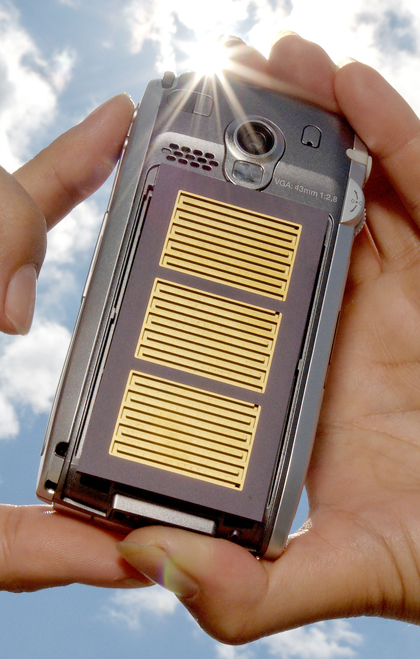 Comments
On 19 Jul 15:00 antichrist wrote
if i will live someday in sahara,i'll buy a phone with solar cells... otherwise,i'll remain at my room charger
On 18 Jul 18:58 Tobias wrote
The point is will it be affordable and compatible with existing mobile phones and devices or will we have to shell out more cash to get new devices that will be 'suitable' for the new gizmo...