Building on their existing collaboration around mobile entertainment, Nokia and Microsoft Corp. have extended their cooperation to include support for Microsoft® PlayReady™ technology into the Nokia S60 and Series 40 mobile device platforms. PlayReady is a new content access technology from Microsoft that makes it easy for content owners and service providers to deliver virtually any type of digital content in a flexible manner. As part of the agreement, Nokia and Microsoft will also collaborate on expanding and simplifying consumer scenarios for accessing, experiencing and moving digital content using mobile devices.

By supporting PlayReady, Nokia will make it easier for content owners and service providers to offer premium digital content for a radically increased installed base and enable more flexible business models, such as renting content or accessing it offline. For consumers, PlayReady brings flexible ways to manage their digital content between online, home and mobile devices. For example, a consumer could purchase content directly from their Nokia device and then transfer the content to enjoy on other designated devices, such as PCs or mobile devices. 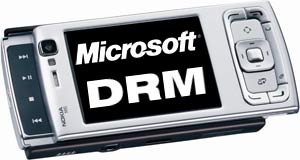 "People are increasingly using their mobile devices for enjoying digital content, such as music, games, videos and photos," said Ilkka Raiskinen, senior vice president of Multimedia Experiences at Nokia. "By adding support for Microsoft PlayReady technology, we are enabling service providers to offer a wide range of content and create truly compelling experiences across mobile devices, personal computers and online services. We plan to support PlayReady across a range of S60 and Series 40 devices starting in 2008."

"Through our collaboration with Nokia, we aim to deliver a compelling platform that offers consumers seamless access to virtually any type of digital content they want," said Amir Majidimehr, corporate vice president of the Consumer Media Technology Group at Microsoft. "Nokia’s breadth of offering in this space, coupled with core digital media technology from Microsoft in the form of PlayReady, will bring new mobile entertainment scenarios to life for millions of consumers around the world."

Microsoft PlayReady is designed for digital entertainment services, devices and applications, with a specific focus on meeting the needs of mobile operators, service providers and device manufacturers. The technology supports a range of business models that can be applied to almost any type of digital content (music, video, games, ringtones, images and more) and a wide range of audio and video formats (including Windows Media® Audio (WMA), Windows Media Video (WMV), AAC, AAC+ and H.264). Microsoft released the PlayReady Client Porting Kit for mobile devices in early August 2007, and expects the first services using Microsoft PlayReady technology to appear in 2008. In addition, Microsoft has designed PlayReady to be fully backward-compatible with Windows Media DRM 10, which means that devices supporting PlayReady can access existing Windows Media DRM-based content as well as new PlayReady content services.

there are 2 aspects of this idea that are defective by design:
1) DRM
2) Microsoft
On 14 Aug 21:11 DoctorMantis wrote
Anything infected my Microsoft is rubbish. Too bad, I was just starting to like S60 devices, too.