In addition, the Nokia X3 Touch and Type is running on Series 40 which are Nokia's mobile phone operating system for entry level devices. The Nokia X3 Touch and Type is for those who are used to typing text with one hand quickly. Nokia must have done some tweaks to the S40 operating system, as input via the screen requires larger selectable elements. As you can see from the illustration picures below, the X30 Touch and Type is missing the usuall navigation key located directly below the screen. Instead we have four main keys for quick access to calls, messaging, music player and end call/power off key. The display is 2.4 inch large which is the same size as the now retired Sony Ericsson G700 touch phone with number keys. I am sure the user interface has improved a lot since 2008 when the G700 was hot, and I think the release of a mobile phone with a combination of a small touch screen and the usual number keys is a clever move by Nokia. We have no information about the CPU powering the Nokia X3, but it is most likely a step up from older S40 devices as touch screen user interface requires more animation on screen and therefore more processing power. I am sure the CPU powering the device is up to the task.

Most touch screen phones available today also has the ability to install downloadable applications. Apple's App Store, Android's Market or even the upcoming Bada platform from Samsung will be competing for developers for their platform. Nokia is no exceptino so they are offering free and paid applications and games for S40 devices for the X3 Touch and Type from the Nokia Ovi store. 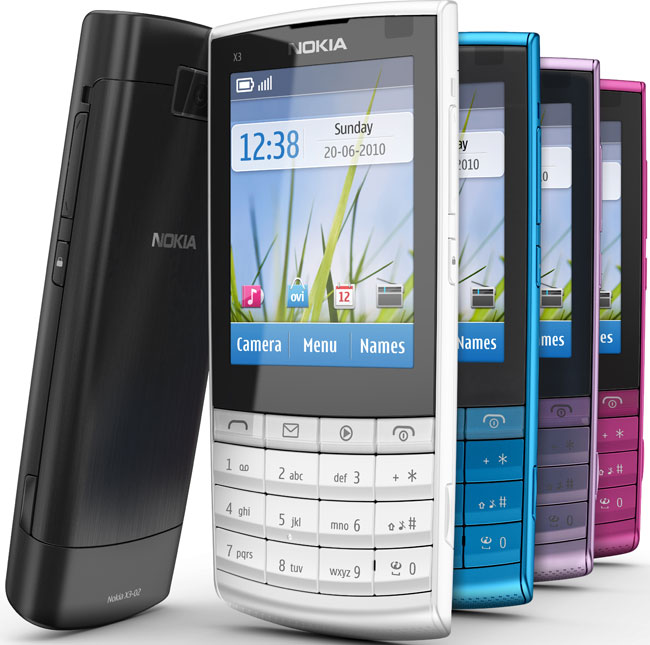 Nokia X3 Touch and Type comes in five coulour variant and should be available in selected markets in 3rd quarter this year.

Comments
On 14 Sep 13:32 gj wrote
X6 has no numeric keypad :( So obviously the only phone in this category (numeric keypad+touchscreen+gps) is Aino with SE proprietary obsolete charging connector :( still can't find deserving successor for my good old P900
On 11 Sep 16:36 yuritch wrote
the x6 is much better than x3..it has gps and conference call.
On 7 Sep 16:02 gj wrote
looks really great, but unfortunately I see no GPS functionality :(
On 21 Aug 23:31 Gola wrote
Ditto...but i wouldnt get one.
On 21 Aug 22:29 pipo wrote
This is a good looking phone!