The Samsung Galaxy S6 has leaked under a new ‘Project Zero’ codename, a title which hints at big changes to come. According to claimed insider sources, the Galaxy S6 is already in development deep within Samsung’s South Korean HQ. Although exact specs are currently unclear, the phone is reportedly being referred to as ‘Project Zero’ due to being ground-up refresh.

The unnamed insiders, speaking with SamMobile, have suggested: “Samsung is developing its next-generation flagship device from scratch, with an entirely new vision.”

The reports added: “Project Zero is an indication that Samsung is trying to achieve something unique and different with the Galaxy S6.”

Exactly what that new vision might be is still unknown. Given the updates made to the Galaxy Note 4, however, the S6 is expected to make the jump to a 2560 x 1440 pixel QHD display and a more premium, metal design. As well as being a common reference to something new and innovative, the Galaxy S6’s ‘Project Zero’ codename is a step away from Samsung’s past, alphabetised, naming structures.

With the Galaxy S5 was referred to as Project K, the S4 and Note 3 original did the internal rounds under the respective monikers of Project J and Project H.

A major refresh is needed for Samsung’s flagship phone line. With the S5 having been seen as something of a minor improvement over the S4, the company’s handset sales and subsequent profits have slumped massively in 2014.

Although the Galaxy S6 is not expected to launch until early 2015, this is far from the first time the phone has been teased. Recent S6 rumours have pointed to the phone landing during MWC 2015 next March with Android 5.0 Lollipop and a 20-megapixel camera in tow.

As you might expect, Samsung has yet to offer any official word on the existence of the S6.


cheers!
Posted by skblakee
Like I said about the galaxy S5 earlier this year, a design is needed. This just might be it.
Posted by Tsepz_GP
Hmm...to think I can't even be bothered about Galaxy S anymore, Samsung put me off the S series this year with the S5.

I hope for their sake the S6 sees even greater success than the S3 and S4. Here in South Africa the S4 has been said to be the most popular Android phone right now due to the mix of top spec and great pricing, hope they achieve the same with the S6.

The S5 was a nice start in trimming TouchWiz, they must continue in that direction and give the S6 a neat differentiator, e.g. how the Galaxy Note series are known for the S Pen, productivity, incredible screens and batt life.

As usual for around this time of year, attention begins to turn to the next flagship Samsung Galaxy S smartphone rather than the current version. The Samsung Galaxy S6 is the next in line and it’s fair to say that we’ve already seen several concept ideas for the phone. Today we’re showing a new Samsung Galaxy S6 design that’s ultraslim and has a metal frame.

Just a few days ago we reported on Samsung’s Project Zero, a codename for next year’s Galaxy S6. It’s thought that the company is completely revamping the handset, so it’s interesting to see this latest concept render that teases us with possibilities such as the metallic body. It comes from Giztimes who have also provided their idea of specs and features for the S6.

These include a Snapdragon 805 processor, a 5.5-inch Super AMOLED display, and 3GB of RAM. It has an 18-megapixel rear camera, a 3-megapixel advanced front-facing snapper, and a 3200 mAh battery. This Galaxy S6 runs the Android 5.0 Lollipop operating system. Features include wireless charging with fast charging technology, and like the Galaxy S5 it will be water-resistant.

Further features are a fingerprint scanner, air gestures, and also a retina scanner. As you can see from the image shown here, this Galaxy S6 render is extremely slim and has a virtually edge-to-edge display. You might like to compare the above specs with the recently rumored specs for the real Galaxy S6 that we reported on here. 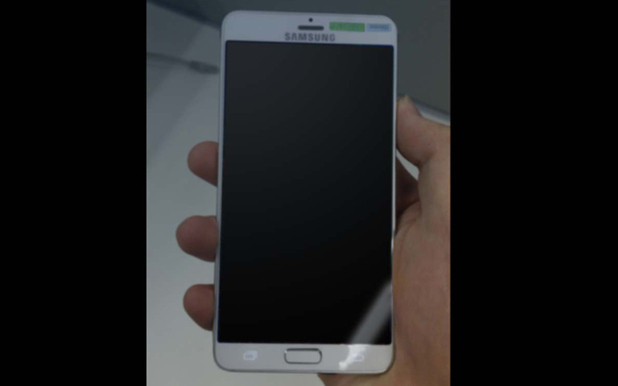 
cheers!
Posted by aussieland1
Qualcomm to provide Samsung with a modified Snapdragon 810
http://m.gsmarena.com/qualcom[....]_snapdragon_810-news-10895.php
Posted by XperiaJunkie
I like how Samsung are starting from scratch, I was very critical about their design becoming stagnant and the choice of materials used ie plastic. Since the inclusion of a metal frame in the Alpha the design and feel has taken a step forward however according to some rumors the S6 will loose it's IP certification meaning no resistance to water or dust also a none removable battery and a glass back similar to the Xperia Z series. If that was to be true would anybody be tempted to upgrade from the S4 or even the S5 or be tempted away to try something new?
Posted by aussieland1
I would if I was not into phablets. I am curious about the s6 - design and even camera .Personally I was never crazy about s5

Samsung Galaxy S6 to pack a 20MP camera with OIS:


http://m.gsmarena.com/samsung[....]camera_with_ois-news-10898.php
Posted by Ranjith
Would love to see an all new design with some good material. Would be awesome.
Posted by aussieland1
Exclusive: Samsung removing bloat from TouchWiz, making most of it downloadable

. The fact that Samsung’s phones and tablets come with a lot of software features is both an advantage and a curse. These features certainly come handy, but on the flip side, they have resulted in Samsung’s software becoming extremely bloated and heavy. With the Galaxy S5, the company started removing some unneeded apps and features, and made some of them downloadable so that they wouldn’t get in the way but still be accessible if someone wanted them Posted by miromiromi
that looks like my aunt's galaxy grand (the shape) with the steel "case." her case is orange, though.
Posted by aussieland1
Samsung Galaxy S6 camera details T-Mobile teases the Galaxy S6′s design on its official website, confirms the presence of a curved display Posted by XperiaJunkie
I know it will have, it has to have, but there is no sign of a Micro SD card slot just a sim tray.
Posted by aussieland1
If I was looking for a new phone I would not consider S6 if it doesn't have microsd card
Posted by XperiaJunkie
I've just had a look on GSMarena where there are few extra images and not 1 shows a memory card slot, in fact GSMarena don't even mention anything about a memory card. Could Samsung be going down the same route as Apple, and offer different memory options without expansion? Sunday will surely reveal all.
Posted by rikken
No sdcard is a minus but no dealbreaker for me. I have a Galaxy Alpha which supports usb-on-the-go and transferring several GB of content doesn't take that long 😊
Posted by XperiaJunkie
A quick video in which some of the specs of the GS6 and the GS6E are said to be reveled.
https://www.youtube.com/watch?v=QjFHv4fZQDc
I must say apart from it looking similar to the ip6 it is a very good looking bit of kit.

. Hopefully they won't charge a premium like Apple do for the 64 and 128GB versions.
Posted by difenbaker


On 2015-02-26 10:57:54, rikken wrote:
No sdcard is a minus but no dealbreaker for me. I have a Galaxy Alpha which supports usb-on-the-go and transferring several GB of content doesn't take that long 😊

I wonder if the S6 will also have usb-on-the-go?


cheers!
Posted by rikken
Yes it does 😃
Posted by difenbaker

Samsung is set to unveil a waterproof version of the upcoming Galaxy S6. The 'Samsung Galaxy S6 Active' could be just one of the alternative models to the Korean firm's new flagship smartphone.

The company did include waterproof capabilities in the Samsung Galaxy S5, which launched last year, but decided to drop the feature from its high-end line up for 2015. This suggests that the arrival of a new rugged submersible model isn't completely out of the question.

Twitter tipster, @Upleaks, is said to have spotted the new handset, which has a mystery model number, similar to that of the Galaxy S5 Active handset, which arrived in May 2014. All of this information remains unconfirmed for now and there are no details about what specifications Samsung could pack into an alternative S6 device. However, the leak suggest that the phone will go on sale before the end of the year.

Splash resistant phones still appear to be desirable to manufacturers - recent rumours about the upcoming iPhone 6s mooted a new waterproof capable device that could feature a lightweight hydrophobic coating that repels water.