Posted by ascariss
Some will disagree with me but this is what the Z ultra should have been from the start, as in the shape and size and camera, minus the HD screen and the no IP58.
Posted by goldenface
I agree. It's a bit low powered but it shouldn't make that much of a difference. They've manage to fit a good camera and flash, which was missing from the ZU.
Posted by motvikt


Agree 100%. If you look at Sony Russia's hands-on, the size is great compared to xperia z1
Posted by Tsepz_GP
I'm thinking 1GB RAM maybe too little, yet at the same time, will people who buy this be concerned about raw specs?
Design is stunning as usual by Sony, can't fault it there, it's targeting all those Mid end Chinese Phablets that Huawei, ZTE etc... Are flooding the market with, im glad Sony has woken up to the Chinese competition as I did say last year that these guys are going to be stealing a lot of sales, especially from companies such as Sony, Htc, BlackBerry and so on.

Posted by goldenface
With those specs and looking at the markets it is aimed at I'm expecting it to be competitively priced.
Posted by Arne Anka


Considering KitKat (which it will be updated to) is supposed to run well on 512 MB according to Google them self, I doubt 1 MB should be considered as too little.
Posted by randomuser
399 Euros RRP. So actual online prices could be as low as 340 Euros


Considering KitKat (which it will be updated to) is supposed to run well on 512 MB according to Google them self, I doubt 1 MB should be considered as too little.


I think 1MB would be a bit too little

Yep, I get what you mean.
Posted by itsjustJOH
^That ain't bad, you could solve basic addition and multiplication, just don't divide by zero.

Display looks awesome! Camera man was finding a bad angle but the IPS display just looked good.
Posted by Away
This is going to sell really well. Looks amazing.
Posted by xenia
http://mobiltelefon.ru/post_1389724241.html
Posted by goldenface
Top notch design again from Sony, the design language is spot on.


yeah, get rid of the non sense pencil (anything) screen for the Ultra, extra bezel is not worth it and it makes no sense whatsoever in real life since you will probably scratch the screen. Too much sacrifices for a lot of non practical stuffs.

Back to the topic, this phone should really be shipped with Android 4.4, since it only have 1 gig ram.
Posted by king-james
I can bet this device will overtake the Z Ultra in selling units.

Sony should bring this device from begin instead the bigger Z Ultra. Finaly they didn't forget the LED flash.

Posted by Gitaroo
only 8 gig storage kind of ridicules for this day of age, they better let people install app on SD card.
Posted by Arne Anka

Posted by goldenface
May be they were cancelled.
Posted by tonif430
love it
Posted by Ranjith

Maybe this is supposed to be an upgrade to the Xperia T/TX?
Posted by Kingskiel

Posted by amirprog
phone arena's review: http://www.phonearena.com/rev[....]-T2-Ultra-Review_id3676/page/4
"The T2 Ultra is the longest-lasting mobile device we've ever tested, with the record 10+ hours of screen-on time – need we say more?" best mobile battery life ever? i did NOT expect that from a mid range phone. very impressive.

Posted by king-james
GSMarena can confirm that: 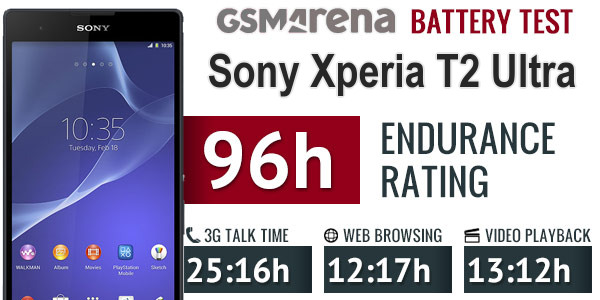 Posted by itsjustJOH
^Damn that's awesome for a midrange!
Posted by rikken
That is really impressive

The z2, s5 and Note3 have all great batterytime but this is something else.
Posted by Bonovox
The Note 3 am afraid has poor battery under KitKat
Posted by Vipera ammodytes
fantastic battery results, and the camera is great too
Posted by itsjustJOH

Most devices that got updated to KitKat got the same problem.

Indeed. Just by using GSMArena's Photo Compare Tool and comparing it to the T, Z, Z1 and even the best in class 5S, Note 3 and 808, it's easy to say that Sony has done a fantastic job with the software for a mid-range phone.

Pan to the gravel and the grass on the right side and the girl's face for a better comparison. Remember to scale it to 8 or 12 MP.

Of course, 808 wins, showing that there are actually brown pebbles on the gravel (the T did show it, just blurry). Compared to the Note 3, I say it just lacks the sharpness.

Edit: The picture of the gravel with the brown pebbles is old and might had been replaced with a newer, grayscaled one.
[ This Message was edited by: itsjustJOH on 2014-05-12 14:56 ]

Posted by 10123
Had this handset for about a month now (shipped in from Japan).

Hate to say it but the phone is trash, the processor has not been optimized at all.

Pretty much all the problems on the sony forum I've got but I decided to take the risk anyway.

To get anything out of this junk several restarts are required. When the Walkman player crashes it no longer plays music so you have to reset the phone.

To begin with the phone was great which probably explains the positive reviews. I'm thinking of re-flashing the software every two weeks using Sony -Update service to try and get some stable use.
Posted by Midi_Amp
Guys, need more input on this phone. I'm planning to upgrade to this phone from Asus Zenfone 5 because of the wild nature of the Intel processor (mostly about apps incompatibility). I like the big screen, but just wondering about the RAM, is 1 GB enough? I'm quite a heavy user on my phone. I use it to type on Microsoft Mobile, and do presentation via miracast, play some games, browse and read pdf. At max I'm already down to 400 MB of RAM left on random check.

I'm fresh out of Windows Phone, so just wondering if Android is still a resource hog after all these updates.
Posted by Tsepz_GP
I wouldn't touch anything with less than 1.5GB RAM at this point in Android unless it's a Motorola Moto or a Google One device.


Thanks, I think I might just hold it off for a moment first.
Posted by king-james
@Midi_Amp

Forget T2! Go and catch the Z Ultra! Much better, a real highend flagship! And it costs sooooo cheapppp now!!!

I have two Ultras, my brother also got one. I'm very happy.

I tried many many new other devices but no one has a chance vs the Ultra! I always came back to Ultra. Had Z2, OneplusOne and many more...

If you don't need a good cam and can live with the size then its perfect for you!

When I buy a new device then only the Ultra successor, nothing else!

Posted by Midi_Amp
Sadly I need the dual sim... From Sony, the T2 Ultra seems the best choice around from any angle (battery life, camera, screen size, specs).
Click to view updated thread with images