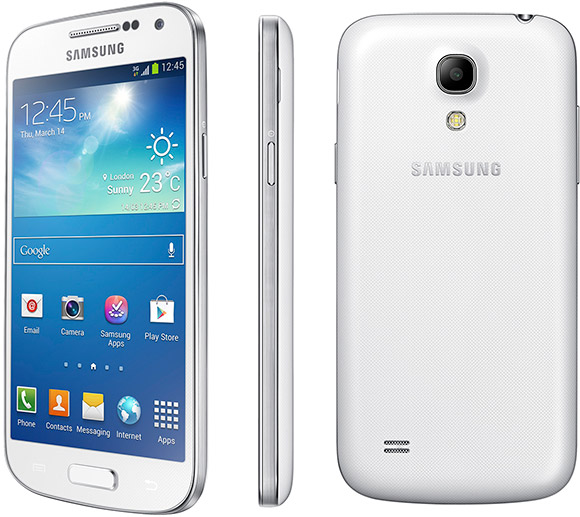 
Posted by julias
Not so Mini then.

Posted by Tsepz_GP
Wow, 107g, 1.5-2GB RAM, IR Blaster , LTE, 1900mAh battery and to top it off, Android4.2.2 out-the-box while other manufacturers are still pushing out flagships on 4.1.2? Great work by Samsung and on top of that the TouchWiz features such as Multi Window Multitasking, Multi item Clipboard, Samsung Hub, Samsung Link etc... It's one hell of a package! If this had a HD720P display and Exynos 5 Dual like the Nexus10, it would've been perfect, but its a great package as is, it could be a threat to the big GS4 as the iPad Mini is to the iPad though.

I wonder if it has the same super sensitive display as GS4 and Gesture sensor? If so, it's exactly what Samsung need to combat the onslaught of mid to low end Nokia Lumias, the possible iPhone Mini and the low end Chinese phones from ZTE, Huawei, Lenovo etc...
[ This Message was edited by: Tsepz_GP on 2013-05-30 13:12 ]

Posted by Bonovox
Hmmm,maybe,maybe not. Price wise this will be alot more expensive than Nokia mid range or lower end Lumia's. The GS3 Mini was way over priced when released
Posted by jameshopes
Looks good!! What about the variation in the price of Galaxy S4 and Galaxy S4 Mini.
Posted by Bonovox
Look in this video is shows how big the Mega is to the Mini

Posted by Bonovox
You still got a 3GS??

Posted by lazeeboy
Yup. And it still serves me well. Darn thing just won't quit working on me.

Posted by Tsepz_GP
iPhone3GS is probably the best supported phone of all time, we've still got one in the house somewhere running iOS6.1, and it runs pretty well, does have the odd stutter and lag here and there though. I think the 3GS's road ends at 6.1.3 though, maybe it will get iOS7, MAYBE, but it has had an excellent run, I wish Apple would bring back its design though, the curved back and rounded edges make it the best iOS device in terms of ergonomics.
Posted by Supa_Fly
tst
Posted by Miss UK
Lol I might get a secondhand 3GS or iPhone 4 for my HiFi once I've got my new iPhone
And sell my 4S Cos apple have changed the connectors on there new phones and lol

Posted by johandirano
The only complain I have with Samsung is it’s the same old design. I wish Samsung could come up with new design in market.
Posted by Miss UK
Lol Samsung have only had the 3 and 4 look the same
So far including the larger Note device

Posted by Bonovox
No,Samsung's designs have been same for ages now. You only gotta look at GSM Arena Samsung phones section to see that. The odd one or two have differed but not by much
Posted by Miss UK
Ok thanks for that Bonovox you can tell I don't follow them so

Posted by Bonovox
GS4 Mini is way over priced for a dual core and it's specs. Some places selling it over £400
Posted by Miss UK
I wouldn't bother buying it bonovox
Just get the SG4 if you really need to

Posted by Bonovox
I've never thought about buying the Mini
Posted by goldenface
Apparently this isn't selling so well. Probably because it's a dumbed down version of the S4 with poorer specs and not a shrunken S4.

The Xperia Z1 f shows how it should be done.
Posted by itsjustJOH
^Dumb down specs and premium price.
Posted by razec

The Xperia Z1 f shows how it should be done.

ZR already wiped the floor with it, Z1f is a completely different beast and I personally think it's absurd to even say Z1f is "competing" with the Samsung and HTC minis

TBH, S4 mini would fare better against the other overpriced product: 5c