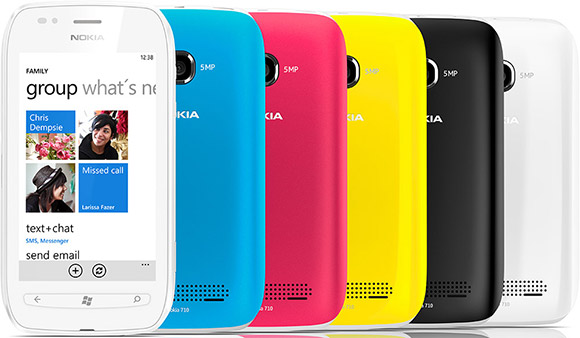 Nokia Lumia 710 is the second Windows Phone 7 from the Finnish mobile phone maker. The Lumia 710 will start selling in Taiwan today and in stores in Singapore, Hong Kong, India and Russia the within a week. Nokia 710 expected retail price is 270 Euro which is very cheap for a Windows Phone 7 smartphone.

Both the more expensive Lumia 800 and the Lumia 710 are powered by a 1.4 GHz processor and both phones has a 3.7 inch touch display. Where the Nokia 800 has inherited the nice form factor from the Nokia N9, Lumia 710 looks more like an entry-level smartphone.

To cut the price down to 270 Euro, Nokia has made some sacrifices. Lumia 710 has ClearBlack display technology but does not have a AMOLED display. As usual, Nokia offers many colour variants for their mass market models. The Lumia 710 is no exception and you can buy it with either black or white front and with the following back covers: fuchsia (red), black, yellow, white, cyan.


Posted by Bonovox
I really like what Nokia is doing here. A decent affordable Windows phone but not skimped on quality. If they can make this popular then Nokia will be back in the mass market business again like they were so good at before. That's what I think anyway.
Posted by etaab
Its encouraging but i think Nokia at the moment have sacked one too many of their employees, mainly the design team. The 800 is simply a N9, so no design needed and this 710 is simply a very budget looking phone. Its great having budget phones which run WP, but to look cheap and nasty isnt the best idea imo.

Im not saying the 710 looks cheap and nasty, but by looking at it you can clearly tell its a budget line.
Posted by hihihans
This is good phone for people to test WPmango