To add to a full set of specifications, the phone incorporates a front facing camera and a scratch resistant screen with excellent resolution and brightness and integrated touch keys. Sony Ericsson’s unique integration of Facebook inside Xperia™ delivers a unique consumer experience for greater social interaction. In combination with the Google services, as well as access to over 200,000 Apps via the Android Market™, it provides a solid and entertaining smartphone foundation.

Daniel Sandblom, Global Product Marketing Manager, Sony Ericsson said: “We expect Xperia™ ray to appeal to consumers who are looking for a combination of beautiful design and a rich feature set. We are able to uniquely deliver this with a combination of premium materials and multimedia features provided by Sony.”

Sony Ericsson Xperia™ ray will be available globally in selected markets, including Japan, from Q3 2011.

*Please note that all services mentioned below may not be available in every market.

Talk time GSM/GPRS: Up to 6 hrs 50 min*
Standby time GSM/GPRS: Up to 430 hrs*
Talk time UMTS: Up to 7 hrs*
Standby time UMTS: Up to 440 hrs*
Music listening time: Up to 36 hrs
Video playback time: Up to 6 hrs 45 min
*According to GSM Association Battery Life Measurement Technique. Battery performance may vary depending on network conditions and configurations, and phone usage.
Networks

Posted by goldenface
Rather nice. Still no official spec list though, although rumour has it it has an 8.0Mp Exmor R camera. Don't quote me on that though.

Posted by Phoner
I won't. I will update the post as soon as the specs will be officially available.
Posted by razec
actually it's like a glorified Nokia X6 with Android, SE's touch makes it more interesting though i still don't know why circular buttons does not attract me
Posted by mode
I like the direction

Posted by Ravager
nice looks and good hardware, if the price is right it will sell good! I can't figure out if it's the X8 successor or a upper market device, on the photos it looks rather expensive. It all comes down to the materials and build quality.

Posted by Alihosny
but i feel the design is a lot like this x6: 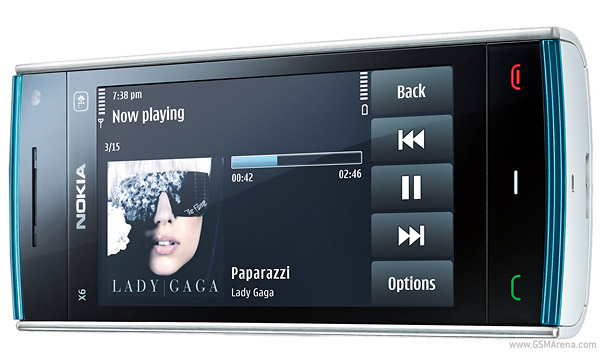 Posted by razec
^^ Exactly as i said on my first post here.
Posted by Alihosny
didn't notice your comment sry. but as i said i would really like to see it's back and some high quality live pictures because it appears that it's ugly looking in live hands-on to me the mini pro and mini are far more elegant,a picture of the white version may make me change sides though, however, i would probably end getting this one because of the screen size.
[ This Message was edited by: Alihosny on 2011-06-22 10:06 ]

Posted by HxH
looking good device, but I my heart still going for arc
Posted by razec
I agree. Play and Mini had looked great in white
Posted by HxH
http://www.youtube.com/watch?v=XZ9w_XFQMHo

Posted by tranced
That's the trend now.
Posted by Ravager
The promo convinced me, I want one!

It reminds me of my beloved T610 also designed by a Industrial designer (Erik Ahlgren). If it just had a xenon/plasma flash...

Posted by argiriano
That`s my new Xperia - not so big, good screen, good camera, last OS, sleek design (the back kinda reminds me of Arc). If

place this phone below Neo price tag it will be a hit I think.
Posted by roanmy
This one seems interesting! Finally a good specced smartphone without having to have huge display or poor resolution.
Posted by Alihosny
Official site is up:
Xperia ray official site

's trend. I mean the market.
Posted by julias
Not impressed all the Xperia phones just seem to look exactly the same why can't they make the designs look different?

Just a touch screen version!
Posted by Alihosny
SE PR is a mess , what were they thinking of:

Posted by mr_lou
Aah, yet another candidate in my now 5-year long quest to find a device that gave me as much as my W800 did.
Settling for a W760 didn't give me much pleasure.
Trying out a Nokia N82, didn't go that well either.
Vivaz Pro joined the group of disappointing devices.
And Neo too just recently.

It'll be interesting to see if Ray will be the one that finally replaces my Aino.
Posted by idumbakumar
look at.. there's an XLOUD feature... whats about that???
Posted by argiriano

it`s an engine, just like Bravia Engine but instead improving image it works it`s magic on sound quality.
Posted by sambouka
Is this HDMI on the dock?
Seems like a micro USB and a normal USB?

Posted by Legen
This is actually a pretty decent phone. It will sell quite well especially if pricing is right. I think it'll sell more than the others(arc, neo, etc).
I think i know where sonyericsson is going with releasing kinda similar phones. They're pulling a samsung. Which can work don't you think?
Posted by rog
Camera samples shot using the XPeria ray:

http://www.se-first.com/Xperi[....]-live-pics-camera-samples.html
Posted by Legen
@rog. What with the different coloured semi-circle light above the home button? Saw it in one of the pictures
Posted by Arne Anka


It's the LED notification.
Posted by rog
Yep, that's the notification LED. Quite nicely solved, I find...

+1. They've managed to fuse Android with their previous trademark design. I love the fact that Ray is so

. I have a good feeling about SE's overall direction

Posted by Bonovox
Out of all the

models announced today this is the only decent looking one

Posted by sunrise_
Pity it has no shutter key, but I will buy it anyway

Posted by hihihans
This phone shows why I like

It has a good chance to become mine.

this way!
Posted by argiriano
I like Ray more than Neo, and Arc is too big for me so the choice is easy one.

Posted by c96sthl
the position of the camera and LED and 2nd mic seem to suggest it is good to hold the phone in portrait mode as using it for landscape might be tricky unless its easy for one to stable it using one hand.

well this is a fashion focus phone so likely this is the primary role.

honestly for me. even most SE phone look like each other but at least it is better than Samsung.
we don't see any SE touch screen phone really look like iPHONE except it have a touch screen and minimal button
but Samsung.... i still insist they deserved to be sued by Apple for that almost direct copy and paste approach.


On 2011-06-23 11:14:30, c96sthl wrote:
the position of the camera and LED and 2nd mic seem to suggest it is good to hold the phone in portrait mode as using it for landscape might be tricky unless its easy for one to stable it using one hand.

well this is a fashion focus phone so likely this is the primary role.

honestly for me. even most SE phone look like each other but at least it is better than Samsung.
we don't see any SE touch screen phone really look like iPHONE except it have a touch screen and minimal button
but Samsung.... i still insist they deserved to be sued by Apple for that almost direct copy and paste approach.


On 2011-06-23 11:14:30, c96sthl wrote:
we don't see any SE touch screen phone really look like iPHONE except it have a touch screen and minimal button
but Samsung.... i still insist they deserved to be sued by Apple for that almost direct copy and paste approach.

and minimal button design is nothing... Symbian is to blame about that point as it wasn't designed as a whole finger touch screen but to use stylus instead... and this made getting rid of the keypad a hard job for any maker
Posted by aksd
This phone actually reminds me for some reason of the SE's of old. The T610, W800 and so on, it just has something about it. Most definitely getting one.
Posted by pavlov's_dog
I wonder if the Xperia Ray will work with the LiveDock accessory for HDMI out.
Posted by Supa_Fly


My thoughts exactly - on the specs on page 1 of this thread I didn't see HDMI support on Xperia Ray.

To be honest THIS is what Arc should've been - there was no need for such an incredibly elongated screen - but the Arc is still beautiful. Ray ... will be a StingRay and I think will sell more.

Why didn't SE go with a dual-core cpu on this?! Although SE is pushing incredible efficiency out of the single Dragon cpu's I worry that new Android OS after 2.3 will be taxed on this.
Posted by emzee_ali
check this article on mobile-review.com. Gives more details abt the accesories and the phones.

"The second accessory is a cradle that you can put upright on the table or lay it down horizontally and it also features the Sony Ericsson app. On the back side of the cradle there is an HDMI slot and when you connect it to your TV a respective app is launched.
You can connect a wireless keyboard and a mouse (I used SE Play) to get a kind of a mini PC with a large screen. It is very convenient for web browsing, email and other apps and it also supports wireless gamepads for playing (during the demo they used a wireless PS3 gamepad). " Posted by Rookwise
Well. I was sold on the Neo pro as being my next phone to replace my x10 but after seeing this i'm now leaning more towards the Ray.
Pages:
123 ... 161718  Next
Click to view updated thread with images