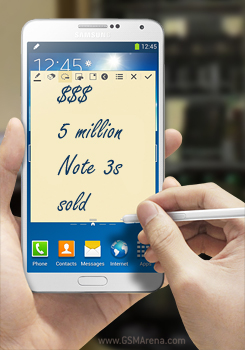 Analysts expect the Samsung Galaxy Note 3 to take up the slack now that the Galaxy S4 has passed 40 million sales and demand is weakening. According to Korean publication Hankooki (quoting the president of Samsung Mobile), the Note 3 phablet is off to a good start, having sold 5 million units in one month.
For comparison, the original Galaxy Note took 5 months to just ship 5 million units (not the same as sales). Of course, that was quite an achievement, too, given that back then phablets were an unproven concept.
The successor, the Galaxy Note II, sold 3 million units in its first month of availability and took another month to make it to the 5 million mark. Combined, Note and Note II have sold over 38 million units to date.
The Samsung Galaxy S4 sold 10 million units in the first month, which makes the Note 3's sale numbers all the more impressive – the S4 has a much wider target audience as phablets are still somewhat of a niche market.

I think they mean shipped.

Anyway, I wonder how the a Galaxy Note 3s smartphone and Phablet competitors such as the Z Ultra, Z1, and LG G2 have done? Their OEMs have been very quiet about sales numbers.

Will also be interesting to see how the Htc One Max and Nokia Lumia 1520 do against the Note 3.

Posted by Hobbs
Pretty damn impressive.Whats even more impressive is most the Note 3's software goodies have landed on the Note 2 after the 4.3 leak via XDA.If I wasn't so happy with my Note 2 I'd be one of the people buying one of those shipped 5 million units.The Galaxy Note series is awesome.
Posted by badassmam
I think the Note hits that sweet spot in terms of size, specs and software. Its a killer combination while the competition is always a little off the mark. Unless someone makes a phablet that pretty much copies the Note I don't see how things will change. The Note has a reputation and fan base that will takes years to crack. I suppose its a bit like iPhone users who only have one decision which is, "do I upgrade or wait for the next model?". The hard part will be for Samsung to maintain the interest each time. The HTC and Nokia phablets are simply bigger versions of their phones, Note does more.
Posted by rikken
I am not surprised, the Note 3 is an amazing phone which more and more people come to enjoy

Posted by Tsepz_GP
They did an excellent job with the Note 3, incredible how it's selling considering it's a niche product.

Seeing as my 2014 phone upgrade is in July, I may just skip the GS5 and get a Note 4, if the 3 is anything to go by, the 4 will be something incredible.
Posted by rikken